Giving Back and Moving Forward Together

The celebration of Martin Luther King Jr. Day and recognition of Black History Month called to us a little louder this year. With so many in our beloved Black, Indigenous and People of Color communities experiencing dire racial, economic and health crises, doing nothing to help was not an option.

Although COVID-19 has upended our team’s ability to gather and give together in person, we know there is much we can still do to step up as agents of change and make a difference. Dr. King once said, “Everybody can be great … because anybody can serve.” As a B Corp agency focused on using business as a force for good, service is in our soul.

This MLK Day, we “closed for goodness” to celebrate our fighter for justice and bring to life his vision of neighbors working together to build a better future. A “day on,” rather than a “day off,” each of us at R+M selected cause(s), nonprofit(s), volunteer opportunities and educational activities near to us, and committed to using the day to serve our communities better. 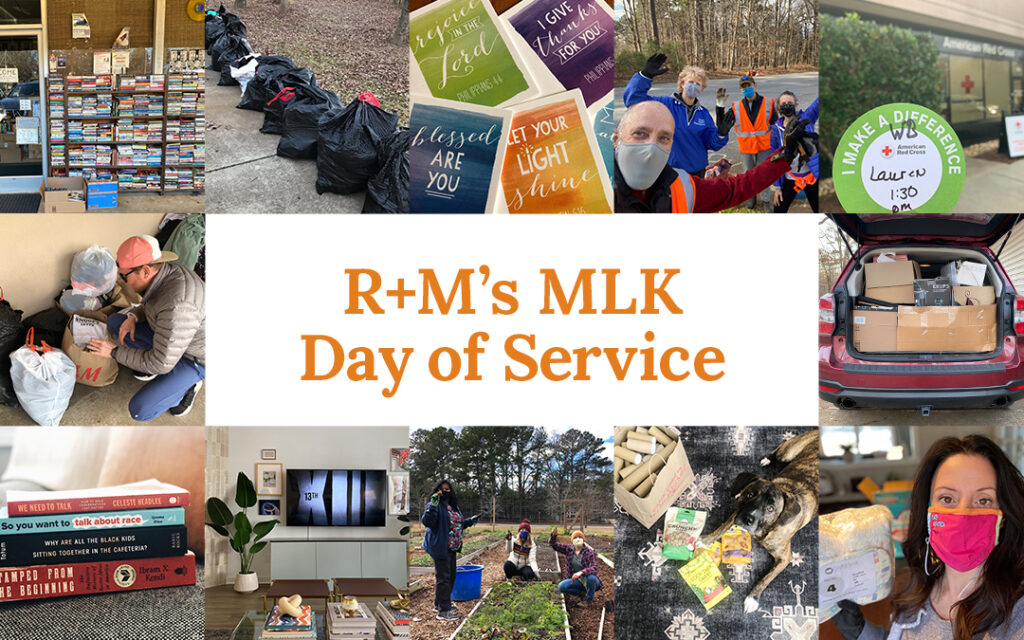 Here are the ways we chose to give, serve, help and reflect this MLK Day:

Donating Our Time, Energy and Love

Activate Good teamed up with the Diaper Bank of North Carolina to meet a 400% increase in diaper needs across our state, or 30,000 diapers. Susan signed up for remote participation (the week prior), bought 400 diapers, downloaded the instructions and got packing!

Lauren headed over to the American Red Cross to donate whole blood. Blood donations have been down 30% during the COVID-19 pandemic, largely due to canceled or scaled back blood drives, as well as general public hesitation to potential exposure. Still, maintaining an adequate blood supply is vital to public health. Blood donors help patients of all ages – accident and burn victims, heart surgery and organ transplant patients and those battling cancer and other life-threatening conditions.

Greg, Beverly and Lauren each decided to spread a little cheer and goodness right in their own backyard, cleaning up trash from their neighborhood and delivering care packages and cards to special friends and those in need of a smile.

Currently, 131,000 Wake County residents are food insecure and 117,000 are uninsured. Learning this motivated Caralynn to spend the majority of her day in Alliance Medical Mission’s Community Garden in pursuit of their mission to harvest more than 2,000 lbs. of fresh produce each year for these neighbors. Here, she joined a handful of other volunteers to perform several of the general upkeep tasks on the grounds, including: weeding the produce beds, trimming the bushes around the building, laying mulch, and picking up trash on the grounds.

To round out Caralynn’s service at AMM, the volunteers gathered to assemble hygiene/flu kits, each including a mask, hand sanitizer, tissues, ibuprofen, and a handful of cough drops. Together, they were able to put together ~100 kits!

For part of Chloe’s day, she volunteered at the Boys & Girls Club at her local elementary school, having a blast playing playground games outside for hours. Games included four corners, four square, hide and seek, and many others which had her reminiscing on simpler times and enjoying every second spent in our imagination.

Susan donated a couple of barely-used rugs to Habitat for Humanity ReStore, which has free donation pick up for two or more large items. Proceeds are used to help build strength, stability, self-reliance and shelter in local communities and around the world.

10 million people a year are physically abused by an intimate partner. 20,000 calls a day are placed to domestic violence hotlines nationwide. When Susan was researching where to donate old cell phones, the National Coalition Against Domestic Violence (NCADV) was an easy answer. The revenue generated from the sale of refurbished electronics items will be used to support NCADV programs that help end violence in the home.

The Gift of Learning

Both Chloe and Greg dusted off and boxed up some gently used books (including Chloe’s favorite Betty White book!), delivering them to independent book shops (like Reader’s Corner) to be loved by their next owners.

Goodwill, the Raleigh Rescue Mission, the Durham Rescue Mission and Cause for Paws received their share of R+M clothing, shoes and books donations this MLK Day. Last we counted, between Greg, Gray, Jessica, Chris, Chloe, Blair and Brett – we donated over 20 bags of necessities.

Looking After Our Animal Friends

Melissa and Blair collected toilet paper rolls and paper towel rolls to drop it off to the Animal Protection Society of Durham. Like many rescues and animal organizations, they reuse these rolls for enrichment tools for their cats. The “smallest of things” can mean the biggest impact for some. Greg also went through some dog medications to determine which could be donated and took them to the Rescue Program at Crossroads Veterinary Hospital.

Lauren and Caralynn both reflected on how to be an accomplice to racial equity and justice, and decided to become donating members of the American Civil Liberties Union (ACLU), an organization that has been fighting for the civil liberties of our neighbors for over 100 years. Lauren also donated to The Bail Project, a nonprofit organization aiming to pay bail for people who are not financially capable of doing so themselves.

Jessica ended her day by contributing financial donations to a variety of causes near to her heart, including The Women’s Center, The Food Bank of Central & Eastern NC, the Durham Rescue Mission and the Pancreatic Cancer Action Network.

Learning and Growing Every Day

Caralynn and Chloe each watched Selma – the 2014 film depicting the events leading up to the historic march from Selma to Montgomery, AL, by Rev. Dr. Martin Luther King Jr. and as many as 25,000 other people protesting Black voter suppression and violence, which ultimately pressured President Johnson to finally sign the Voting Rights Act of 1965. Blair also caught up on 13th, the documentary on Netflix focused on inequities in the mass incarceration system.

Melissa purchased several books and started diving into them – “So You Want to Talk About Race” by Ijeoma Oluo, “We Need to Talk: How to Have Conversations That Matter” by Celeste Headlee, “Why are All the Black Kids Sitting Together in the Cafeteria?” by Beverly Daniel Tatum, PhD, and “Stamped from The Beginning” by Ibram X. Kendi.

While MLK Day is just one day a year, we are aware we are also posting this blog during Black History Month. We want to close with a recognition that Black History is happening every day and we will continue to use our voice, hearts, and action to support our commitment to antiracism individually and as a team. How are you celebrating and honoring Rev. Dr. Martin Luther King Jr. and Black History?