Brett* and I have been concepting on how to revolutionize the blogging world. We considered concepting blog topics back and forth via the Comment section of an unpopulated blog. It turned out to be a bit unwieldy and a bit hacky. Then we had our “duh” moment. It’s not the revolution, but it is a tiny uprising.

Lunchtime at R+M is a communal event, not a mass exodus. It’s part of our brand culture – we’re a family. We break bread together pretty much every day and top it off with a few rousing games of UNO®**. We always say, “We should record this; this is pretty good stuff.” So Brett and I did, unbeknownst to the others. 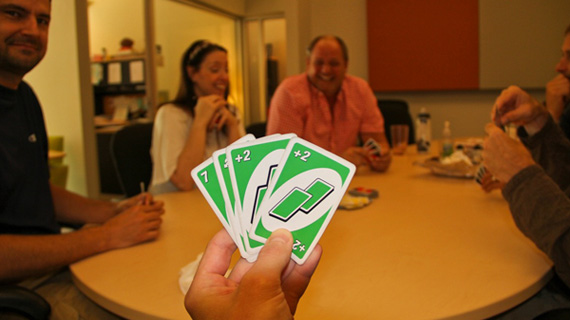 We’re a close group that eats together, discusses anything, debates openly and laughs often. It’s our culture, we’re true to it and we live it every single day whether at lunch or at client meetings. It gives a realness to our brand.

Have you considered your culture and if it jives with your brand. You need to. If your culture doesn’t support it, your foundation is weak and you know what happens with a weak foundation. (BTW, we’d love to have you over for some games of UNO. You’re welcome to join us anytime.)

*This blog would not be possible without the unwavering support of Brett Hartsfield. I am indebted to him for all of his great ideas.

**When it comes to R+M UNO, we have our own “house rules,” which make the games move quickly. Some of our house rules include: if you have the matching card that was just played you can jump in even if it’s not your turn; if you play a 1, you give another card to someone else; play a 2, you put another card on top of the deck; 7’s let you switch hands with another player; 0’s force everyone to rotate hands in the direction of play. There are others, but those are the basics. It’s a riot and the quips are in abundance.