It was just a Thursday night. No plans. Then a tweet appeared.

A local pianist was playing at a neighborhood venue. Eh … wait … what? Seems during his performance he was offering the opportunity to paint his piano. Interesting. Anyone in attendance would be encouraged to take a stab, a swipe, a stroke of color to his piano. Anywhere. Everywhere. The previously unplanned, possibly uneventful evening was quickly turning into a desire to be a part of something a little different. 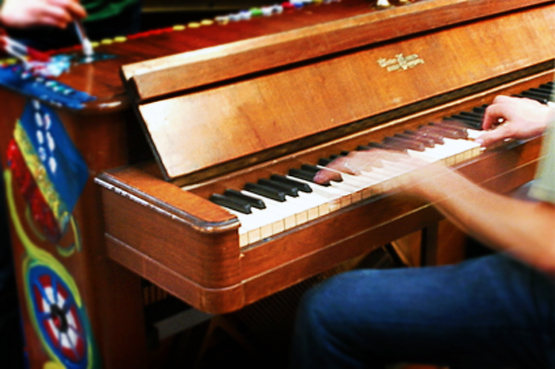 Turns out only months earlier, the pianist began a project that would allow him to play his music in parks, on sidewalks and in downtown plazas. The project seeks to bring the music to the people as opposed to bringing people to the music.

The pianist reached out to where his fans were, drew in patrons who would otherwise not be engaged, promised to involve his audience and delivered. He had them invested – made them a part of his music and in turn part of his brand. It was that extra step, his willingness to be different, that set him apart. Ultimately, he sought to allow his supporters a voice in his music and give them a bit of ownership in his brand.

(For me, that voice meant a small silhouette of Oklahoma with a white paint splotch in the center to represent OKC. I put it on a corner of his piano.)

In a single offering of paint and a brush, a musician had engaged someone who had moved from that white paint splotch only months earlier. In a sense he inspired someone from 1,200 miles away to act.

While building your brand, it is necessary to find the courage and the confidence to be unique, to showcase the things only you have to offer and to find that emotional connection with your consumers.

To see the piano being painted, watch the video linked here.

I’d love to hear what you would have painted. Email me at micah@rmagency.com.